I am the first to admit that as a person who grew up not eating lamb, I had a hard time warming up to the idea as an adult.  I always kind of thought I had plenty of proteins in my lineup so there was no real reason to add another, but then I made this dish.  It’s the first lamb dish I ever made and I use it as a litmus test for those who are skeptical about lamb (read: my mom).  In the years that I’ve been making it, I’ve never had someone determine that they truly disliked lamb after eating it, so if you aren’t sure, give it a try.

The recipe originally came from a Rachael Ray cookbook we received as a wedding present nearly 7 years ago.  I generally am not a huge Rachael Ray fan – I find that in her “30 Minute Meal” gimmick it generally translates to 30 hours of dishes, which I’m so not down with, but in an effort to actually try something out of each cookbook, I gave it a try and was pleasantly surprised at the lack of dishes.  I usually serve mine with a big Greek salad, and estimate that each diner will eat half of one roll (it makes 2 big rolls or 3 moderately sized ones). 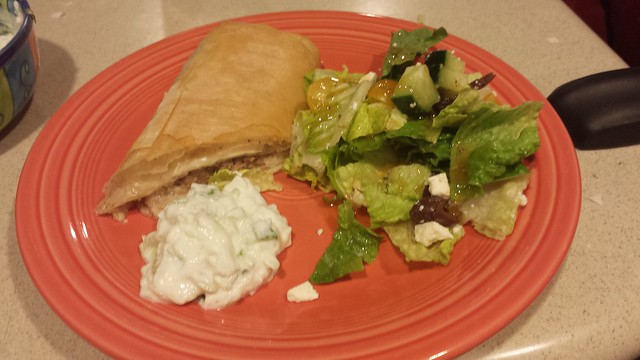 1 jalepeno (only use half if you’re heat sensitive)

1. Preheat the oven to 400 degrees.  Finely chop the green onion, mince the garlic and jalepeno, and melt the butter.  Mix the lamb, feta cheese, garlic, green onions, and jalepeno together in a mixing bowl.

2. On a large cutting board or cookie sheet, lay out your first two sheets of phyllo dough, brush it with some of the melted butter, season with salt and pepper, then add another 2 sheets, butter, salt and pepper again.  Continue until you have 6 sheets of phyllo dough.  Spoon the mixture in a log shape in the center of the dough and fold it up like a burrito.  Repeat for the second and, if you want smaller portions, a third roll.  Use a little butter to seal the edge and brush the tops with a bit before you place them in the oven.  Bake for 15 minutes, until the phyllo is a golden brown.

3. While the rolls are baking, grate the cucumber and onion, mince the garlic, and finely chop the mint leaves.  Stir together with the Greek yogurt to make a sauce.  Serve the lamb rolls with the sauce.